Non-uniform sampling (NUS) is a popular way of reducing the amount of time taken by multidimensional NMR experiments. Among the various non-uniform sampling schemes that exist, the Poisson-gap (PG) schedules are particularly popular, especially when combined with compressed-sensing (CS) reconstruction of missing data points. However, the use of PG is based mainly on practical experience and has not, as yet, been explained in terms of CS theory. Moreover, an apparent contradiction exists between the reported effectiveness of PG and CS theory, which states that a “flat” pseudo-random generator is the best way to generate sampling schedules in order to reconstruct sparse spectra. In this paper we explain how, and in what situations, PG reveals its superior features in NMR spectroscopy. We support our theoretical considerations with simulations and analyses of experimental data from the Biological Magnetic Resonance Bank (BMRB). Our analyses reveal a previously unnoticed feature of many NMR spectra that explains the success of ”blue-noise” schedules, such as PG. We call this feature “clustered sparsity”. This refers to the fact that the peaks in NMR spectra are not just sparse but often form clusters in the indirect dimension, and PG is particularly suited to deal with such situations. Additionally, we discuss why denser sampling in the initial and final parts of the clustered signal may be useful.

Nuclear magnetic resonance is a “workhorse technique” used in metabolomics, complementary to mass spectrometry. Unfortunately, only the most basic NMR methods are sensitive enough to allow fast medical screening. The most common of them, a simple 1H NMR, suffers from low dispersion of resonance frequencies, which often hampers the identification of metabolites. In this article we show that 1H NMR spectra contain previously overlooked parameters potentially helpful in metabolite identification, namely the rates of temperature-induced changes of chemical shifts. We prove that they are reproducible between various metabolite mixtures and can be determined quickly when Radon transform is used to process the data.

The construction of an efficient conductive interface between electrodes and electroactive proteins is a major challenge in the biosensor and bioelectrochemistry fields to achieve the desired nanodevice performance. Concomitantly, metallo-organic terpyridine wires have been extensively studied for their great ability to mediate electron transfer over a long-range distance. In this study, we report a novel stepwise bottom-up approach for assembling bioelectrodes based on a genetically modified model electroactive protein, cytochrome c553 (cyt c553) and an organometallic terpyridine (TPY) molecular wire self-assembled monolayer (SAM). Efficient anchoring of the TPY derivative (TPY-PO(OH)2) onto the ITO surface was achieved by optimising solvent composition. Uniform surface coverage with the electroactive protein was achieved by binding the cyt c553 molecules via the C-terminal His6-tag to the modified TPY macromolecules containing Earth abundant metallic redox centres. Photoelectrochemical characterisation demonstrates the crucial importance of the metal redox centre for the determination of the desired electron transfer properties between cyt and the ITO electrode. Even without the cyt protein, the ITO-TPY nanosystem reported here generates photocurrents whose densities are 2-fold higher that those reported earlier for ITO electrodes functionalised with the photoactive proteins such as photosystem I in the presence of an external mediator, and 30-fold higher than that of the pristine ITO. The universal chemical platform for anchoring and nanostructuring of (photo)electroactive proteins reported in this study provides a major advancement for the construction of efficient (bio)molecular systems requiring a high degree of precise supramolecular organisation as well as efficient charge transfer between (photo)redox-active molecular components and various types of electrode materials.

NMR spectroscopy is one of the basic tools for molecular structure elucidation. Unfortunately, the resolution of the spectra is often limited by inter-nuclear couplings. The existing workarounds often alleviate the problem by trading it for another deficiency, such as spectral artefacts or difficult sample preparation and, thus, are rarely used. We suggest an approach using the coupling deconvolution in the framework of compressed sensing (CS) spectra processing that leads to a major increase in resolution, sensitivity, and overall quality of NUS reconstruction. A new mathematical description of the decoupling by deconvolution explains the effects of thermal noise and reveals a relation with the underlying assumption of the CS. The gain in resolution and sensitivity for challenging molecular systems is demonstrated for the key HNCA experiment used for protein backbone assignment applied to two large proteins: intrinsically disordered 441-residue Tau and a 509-residue globular bacteriophytochrome fragment. The approach will be valuable in a multitude of chemistry applications, where NMR experiments are compromised by the homonuclear scalar coupling.

Temperature as an Extra Dimension in Multidimensional Protein NMR Spectroscopy 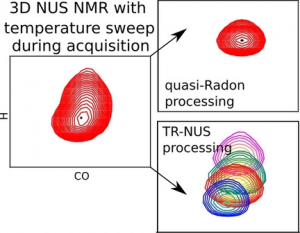 NMR spectroscopy is a particularly informative method for studying protein structures and dynamics in solution; however, it is also one of the most time‐consuming. Modern approaches to biomolecular NMR spectroscopy are based on lengthy multidimensional experiments, the duration of which grows exponentially with the number of dimensions. The experimental time may even be several days in the case of 3D and 4D spectra. Moreover, the experiment often has to be repeated under several different conditions, for example, to measure the temperature‐dependent effects in a spectrum (temperature coefficients (TCs)). Herein, a new approach that involves joint sampling of indirect evolution times and temperature is proposed. This allows TCs to be measured through 3D spectra in even less time than that needed to acquire a single spectrum by using the conventional approach. Two signal processing methods that are complementary, in terms of sensitivity and resolution, 1) dividing data into overlapping subsets followed by compressed sensing reconstruction, and 2) treating the complete data set with a variant of the Radon transform, are proposed. The temperature‐swept 3D HNCO spectra of two intrinsically disordered proteins, osteopontin and CD44 cytoplasmic tail, show that this new approach makes it possible to determine TCs and their non‐linearities effectively. Non‐linearities, which indicate the presence of a compact state, are particularly interesting. The complete package of data acquisition and processing software for this new approach are provided.